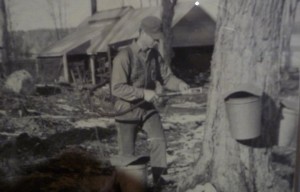 In 1955, Lauris Moore and family moved from a sugarhouse on Bumfagon Road in Loudon to a newly built sugarhouse, complete with electric lights and concrete floor, located on busy Route 106. They had 1350 buckets put up around the saphouse, 150 more on the road and another 900 in their old sugarbush on Loudon Ridge. They boiled on a wood-fired 4 x 14 evaporator. They also sold sapping supplies. 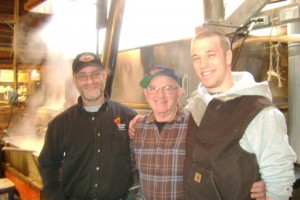 In 1972 Sunnyside Maples was formed and in 1981, Richard & Elaine Moore started a pancake restaurant which ran for 23 years. The family served on the weekends and it became a very popular stop during the season.

Sunnyside Maples continues to be a traditional New Hampshire business with the help of fourth & fifth generations of the Moore family (Mike, Cheryl, Nick & Ryan) and is still operated on the same site. All of the sap is gathered with tubing and we now cook on a high efficiency 3×10 oil-fired evaporator assisted by a steam-away and reverses osmosis system. 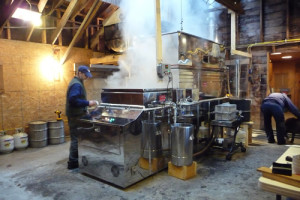 Located just south of the Lakes Region on Route 106 in Loudon, our sugaring season begins in late February, when the warm days of approaching spring offset the chill of late winter nights. For the next few weeks, work continues at a feverish pace…tapping trees, collecting sap, boiling and bottling it with care, producing one of New England’s purest pleasures for your enjoyment…until warmer nights signal the end of another brief sugaring season.

Between the end of February and the first of April our Gift Shop features all types of delicious maple products, made by the Moore family.

Also available are other NH made items. Our Gift Shop and Sugarhouse close mid April, but all of our products and supplies are available year-round by calling or 603-783-0321 or visiting our online store. 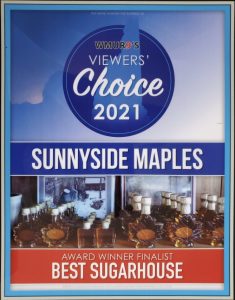